7 Situations When A Ute Tray Is a Must-Have Accessory

Lots of people think ute trays are an accessory only tradies need. Yet, ask any tradie why you should consider a ute tray and they’ll probably rattle off dozens of unique reasons you might never have considered, from hauling to makeshift camp beds.

The fact is: Ute trays are versatile. Yes, they are a must-have item if you work as a tradesman. Plumbers, builders, mobile mechanics, and HVAC specialists, for instance, all use ute trays to carry tools, and accessories like locking tool boxes, and roll-out tray drawers, ladder racks are often added on a UTE to maximise the tray’s versatility. But even if you’re not a tradie, a ute tray can come in handy in numerous situations.

If you drive a ute, investing in a replacement tray or upgrading your factory-installed tub offers a bunch of advantages. Who knows? Your ute’s tray might just be super useful when you least expect it. Here are a few situations – beyond carrying tools to the job site – when you’d be screwed without a ute tray. 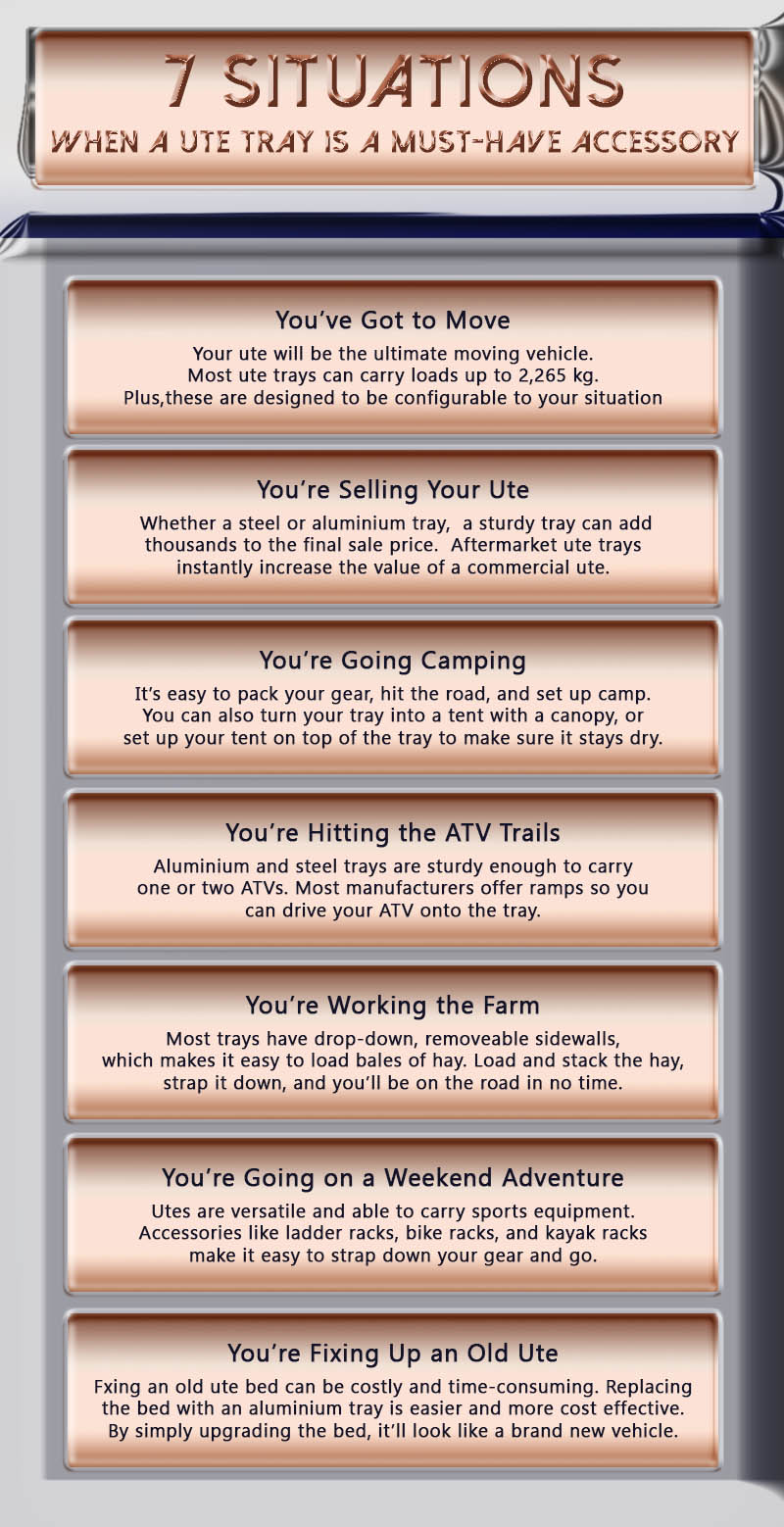 You’ve Got to Move

Moving is the worst. No one wants to spend the time renting a moving truck, only to come back home and pack up. If you have a ute, there’s no need to worry. Your ute will be the ultimate moving vehicle. Here’s why: Most aftermarket aluminium ute trays can carry loads up to 2,265 kg. That’s more than enough for a simple move. Plus, UTE trays are designed to be configurable to your situation, i.e. removable sidewalls and ratchet strap hooks.

When it comes time to part ways with your UTE, a sturdy tray can add thousands to the final sale price. This is especially true if you own a commercial vehicle. Aftermarket ute trays instantly increase the value of a commercial ute. Whether you choose a steel or aluminium tray, you can expect to command more on the open market. Aluminium trays, though, tend to retain more value, due to their durability and anti-corrosive properties.

In Australia, utes have replaced SUVs as the ultimate outdoors vehicle. The reason is simple: Utes make it easy to pack your gear, hit the road, and set up camp. A ute tray adds a bunch of space for hauling around your outdoor getaway gear. Yet, beyond carrying gear, you can also turn your tray into a tent with a canopy, or set up your tent on top of the tray to make sure it stays dry.

Read Also: Car and Ute Accessory Trends to Watch in 2017

Ute trays make it easy to tow all-terrain vehicles and dirt bikes. Aluminium and steel trays are sturdy enough to carry one or two ATVs. Plus, most tray manufacturers offer ramps so you can drive your ATV onto the tray. You can stow and go in minutes – no need to trailer your bikes!

Equestrians, farmers and gardeners love utes, because they make working fields and hauling hay simple. Most trays have drop-down, removable sidewalls, which makes it easy to load bales of hay. Load and stack the hay, strap it down, and you’ll be on the road in no time.

You’re Going on a Weekend Adventure

Kayakers, surfers, bikers – they all love utes for their versatility and ability to carry sports equipment. Most tradies know this secret; their work utes are great vehicles for hauling gear to the beach or trail. Plus, accessories like ladder racks, bike racks and kayak racks make it easy to strap down your gear and go.

You’re Fixing Up an Old Ute

Repairing an old, rusty ute bed can be costly and time-consuming. Replacing the bed with an aluminium tray is easier and more cost effective. You can instantly transform an old ute by upgrading the bed – it’ll look like a brand new vehicle.

Upgrading your ute tray is an easy decision to make. You’ll instantly make your vehicle more versatile, and there are numerous situations in which a ute tray is a must-have accessory.

Why Everyone Needs a Friend Who Drives a Ute

How does The Park and Fly Concept Work?